Kyle Petty previews the Sprint Cup playoffs on the latest episode of the NASCAR on NBC podcast, and the NBCSN analyst is expecting another round of mayhem this season.

The first two editions of the Chase for the Sprint Cup with three-race elimination rounds has featured bizarre finishes, brawls and blatant retribution as the raised stakes and standings resets put drivers in positions producing some wacky behavior.

Petty said Matt Kenseth, who was suspended two races during last season’s Chase for intentionally wrecking Joey Logano, was the “poster child for saying that’s how much pressure is here. When you can rile Matt and push him over the edge … somewhere, I still think there will be mayhem again.”

Other topics covered by Petty:

–His observations of spending two days with Kevin Harvick in his hometown of Bakersfield, California, for an upcoming feature on NBCSN later this month.

–The likelihood of the season’s most frequent winners failing to reach the championship round.

–An amusing tale of an awkward sponsorship situation and what it says about NASCAR teams seeking funding.

You can listen to the podcast by clicking below or download and subscribe to it on iTunes by clicking here. The free subscription will provide automatic downloads of new episodes to your smartphone. It also is available on Stitcher by clicking here and can be found on Google Play, Spotify and a host of other smartphone apps. 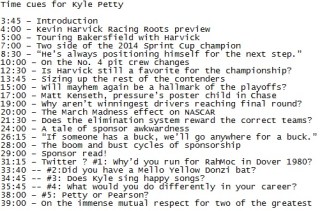