Tonight’s Federated Auto Parts 400 marks the final Sprint Cup race before the Chase field is set. Twelve of the 16 spots are set. Chris Buescher, who won at Pocono, can claim the 13th spot as long as he remains in the top 30 in points after this event.

Chase Elliott, Austin Dillon and Jamie McMurray hold the final three transfer spots entering this race. Ryan Newman is the first driver out of a playoff spot. He trails McMurray by 22 points.

Here’s all the info for tonight’s race:

PRERACE SCHEDULE: The Cup garage opens at noon. The driver/crew chief meeting is at 5:30 p.m. Driver introductions are at 7 p.m.

TV/RADIO: NBCSN will broadcast the race with its coverage beginning at 5 p.m. with NASCAR America, followed by Countdown to Green at 7 p.m. and race coverage at 7:30 p.m. Motor Racing Network’s radio broadcast begins at 6:30 p.m. and also can be heard at mrn.com. SiriusXM NASCAR Radio will have MRN’s broadcast.

FORECAST: The wunderground.com site predicts a temperature of 83 degrees at race time with a 15 percent chance of rain at the start of the race. 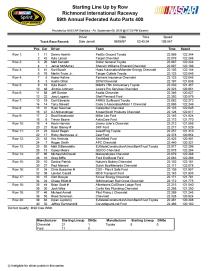