Tonight marks the next-to-last race before the inaugural Xfinity Chase field is set. Three of the 12 spots remain open heading into the Virginia 529 College Savings 250 at Richmond International Raceway.

Ryan Reed, Blake Koch and Ryan Sieg hold the final three spots. Dakoda Armstrong is the first driver out of a transfer spot, 18 points behind Sieg.

Here’s all the info for tonight’s race:

START: ABLE Advocates Catherine Beck and Natalie Beck will give the command start engines at 7:37 p.m. The green flag is set for 7:44 p.m.

PRERACE SCHEDULE: The Xfinity garage opened at 7 a.m. The driver/crew chief meeting is at 3:45 p.m. Driver introductions are at 7 p.m.

NATIONAL ANTHEM: The St. Gertrude’s Girls Choir will perform the anthem at 7:31 p.m.

TV/RADIO: NBCSN will broadcast the race with its coverage beginning at 7 p.m. with Countdown to Green, followed by the coverage of the race at 7:30 p.m. Motor Racing Network’s radio broadcast begins at 7 p.m. and also can be heard at mrn.com. SiriusXM NASCAR Radio will have MRN’s broadcast.

FORECAST: The wunderground.com site predicts a temperature of 84 degrees at race time with a 0 percent chance of rain at the start of the race.

LAST TIME: Dale Earnhardt Jr. led 128 of 149 laps to give JR Motorsports the victory in April. Ty Dillon was second with Earnhardt’s teammate, Elliott Sadler, third. In this race a year ago, Chase Elliott won for JR Motorsports with Kyle Busch second and Brian Scott third. 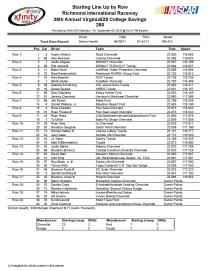