Toyota took four of the top five spots, including the first three. 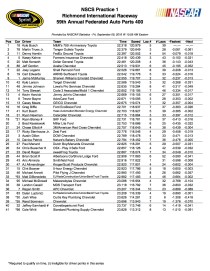 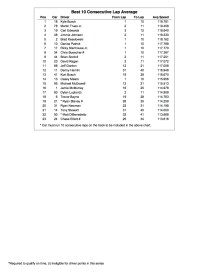 Chase Briscoe‘s victory Saturday night at Las Vegas Motor Speedway sends him into the next round of the Xfinity playoffs.

Briscoe, who also won at Las Vegas in February, advances to the second round.

Briscoe dominated, winning both stages on the way to his second consecutive victory and eighth of the year. He led 164 of 200 laps.

“Awesome car,” Briscoe said on the radio of the car that also won at this 1.5-mile speedway earlier this year. “Can’t say enough, awesome car.”

Gragson said of Briscoe’s car on NBCSN: “Lot of race cars out here and one space shuttle.”

“I knew this team was fully capable of achieving that and even more,” Briscoe told NBCSN of winning eight races this year. “I just can’t say thank you enough to Gene Haas and Tony Stewart and everyone that lets me drive these race cars. It has been an unbelievable season and we still have a lot, six more wins that we can try to get and a championship. That is what we are going to try to do. I am so h

The 25-year-old Briscoe does not know where he’ll run next season. He has a year left on his contract with Ford.

WHO HAD A GOOD RACE: Ryan Sieg’s fifth-place finish is his fifth top five of the season, the most he’s had in a season. … Runner-up Noah Gragson has finished in the top six in all four of his Xfinity Las Vegas starts. He did it by overcoming a bloody nose during the race. At one point, he put roll bar padding up his nose to clog it. … Daniel Hemric had finished 24th or worse in four of his last five starts before Saturday’s race. He finished third at Las Vegas.

WHO HAD A BAD RACE: Ross Chastain finished 16th, last among the playoff drivers. It’s his first finish outside the top 10 at a 1.5-mile speed this season.

NEXT: The series races Oct. 3 at Talladega Superspeedway (4:30 p.m. ET on NBCSN) in the middle race of the opening round of the playoffs.

"It's been an unbelievable season," says @ChaseBriscoe5.

But also, "we've also got six more wins and a championship we can try to get." @NASCAR_Xfinity pic.twitter.com/BnK7MIEImf

Gracie Trotter became the first female to win a race sanctioned by ARCA when she captured the ARCA Menards West race Saturday at The Bullring at Las Vegas Motor Speedway.

“I’m at a loss for words right now. My first year in ARCA, out West, far from home – it just really means a lot to me,” Trotter said after her first series win.

The best finish by a female in ARCA Series history had been second. Shawna Robinson (1999 at Daytona), Erin Crocker (2005 and ’07 at Kentucky and 2006 at Kansas) and Hailie Deegan (2020 at Daytona) each finished runner-up in an ARCA race.

This is the first year that the West Series has been sanctioned by ARCA. It was previously known as K&N Pro Series West. Deegan was the most recent female winner in that series. She won three times. Deegan scored her first career West win in 2018 at Meridian (Idaho) Speedway. That victory made her the first female to win in that series. Deegan went on to win twice more in that series in 2019.

The 19-year-old Trotter is a third-generation racer. She drives for Bill McAnally Racing. Trotter began competing in go-karts at age 8. She was the first female to win the Young Lions Legends Cars division at Charlotte Motor Speedway, capturing the title in 2017. This is her first season in the ARCA Menards West Series.

Trotter pulled away from teammate Gio Scelzi to win by 0.821 seconds Saturday. Teammate Jesse Love, who is the series points leader, finished third.

She took the lead on Lap 54 with a three-wide pass.

“I kind of got a little lucky there,” Trotter said. “The two front cars were battling side by side. I took it three-wide, a little sketchy at first, but I made it stick.”

Trotter also competes for Rev Racing as part of the NASCAR Drive for Diversity program. She won her first Late Model race at Hickory (North Carolina) Motor Speedway on Sept. 13. The win made her the fourth female to win a Late Model Series race at the historic 0.363-mile track, which opened in 1951.

The second round of the Cup playoffs begins with the Sunday Cup race at Las Vegas Motor Speedway.

The 1.5-mile track kicks off the Round of 12. Winning the race and stage points are a premium for playoff drivers before the races at Talladega and the Charlotte Roval.

Kevin Harvick, who won at Bristol, starts from the pole.

Here is all the info for the Sunday Cup race at Las Vegas:

START: The command to start engines will be given by Las Vegas Raiders owner Mark Davis at 7:07 p.m. The green flag waves at 7:17 p.m.

PRERACE: Cup garage opens at Noon. Drivers report to their cars at 6:50 p.m. The invocation will be given at 7 p.m. by Motor Racing Outreach Chaplain, Billy Mauldin. The national anthem will be performed by Sierra Black at 7:01 p.m.

TV/RADIO: NBCSN will televise the race. Coverage begins at 6 p.m with NASCAR America, followed by Countdown to Green at 6:30 p.m. Race coverage begins at 7 p.m. Performance Racing Network’s radio coverage will begin at 6 p.m. and also can be heard at goprn.com. SiriusXM NASCAR Radio will carry the broadcast.

STREAMING: Watch the race on the NBC Sports App

FORECAST: The wunderground.com forecast calls for sunny skies with a high of 96 degrees and no chance of rain at the start of the race.

LAST RACE: Kevin Harvick beat Kyle Busch to win at Bristol and claim his ninth win of the season.

Kevin Harvick will start from the Cup pole position at Las Vegas September 23, 2020 9:00 am