The NASCAR courtship of Kyle Larson mostly came down to cash.

Because the driver didn’t have any to offer, choosing a team was an easy decision.

“I got to come down to Charlotte and meet with a lot of team owners and stuff, and every single one of them was like, ‘Oh yeah, we’d love to do something with you, but we need a half-million dollars,’ ” Larson said on this week’s NASCAR on NBC podcast. “I earned all my rides. I didn’t bring money to any ride.”

During the new podcast episode, which was released early Wednesday morning, Larson explained the yearlong process that led to signing with Chip Ganassi Racing after meeting with several teams in the Sprint Cup Series during the 2011 season in which he became a breakout star in USAC. Aside from Ganassi, virtually every team either asked Larson to bring sponsorship or couldn’t guarantee him a long-term plan to reach Cup.

Larson’s father, Mike, wrote about his son’s move to NASCAR in a post entitled “Hell Week” for TheDriversProject.com.

On the podcast, Larson provided his perspective on those events – including his memorable first meeting with Ganassi nearly five years ago.

“If anyone knows Chip, all of his conversations, at least with me and most people, are really short,” said Larson, who also offers a brief impersonation of his team owner during the podcast. “Within the first minute probably of talking to him, he was ‘Oh yeah, how do we sign you up?’ So I was like, ‘Well, this is awesome. He’s the only guy who didn’t mention a thing about any money.’

“I definitely have to be loyal to him for giving me a shot and taking a big chance on me. It was a huge gamble for this team and Target on a 19-year-old kid from California.”

In his 99th start, Larson scored the first Sprint Cup victory of his career Aug. 28 at Michigan International Speedway, qualifying for the playoffs for the first time. Ganassi said his team and Larson had a long-term commitment. “His contract came up one time,” Ganassi said at Michigan. “ I said, ‘What do you think about these other teams that are talking to you?’  I’ll never forget his answer.  He said, ‘They all had a shot at me the first time around and they passed.’”

Other topics discussed by Larson on the podcast:

–How and why he took a hard-line stance on racing sprint cars in agreeing to a K&N ride with Rev Racing in 2012;

–The career advice from Jeff Gordon that he blithely dismissed;

–His interest in still running the Indianapolis 500 (and why his chances might have improved for doing so);

–His dedication to dirt racing despite its inherently more dangerous safe record.

To listen to the full podcast, you can click below or download the episode by subscribing to it on iTunes by clicking here. The free subscription will provide automatic downloads of new episodes to your smartphone or tablet.

The podcast also is available on Stitcher, Google Play, Spotify and a host of other smartphone apps.

Here are easy reference points for listening to the podcast: 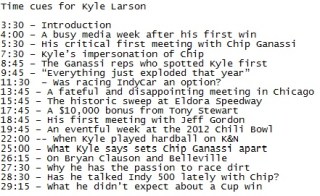