NASCAR celebrates its past with tonight’s Southern 500 at Darlington Raceway. Hall of Fame Inductees Mark Martin, Rick Hendrick and Richard Childress will help give the command to fire engines to a 40-car field that features throwback paint schemes from the 1990s on back.

START: NASCAR Hall of Fame Inductees Mark Martin, Rick Hendrick and Richard Childress, along with Bojangles’ CEO Clifton Rutledge will give the command for drivers to start their engines at 6:12 p.m. The green flag is scheduled for 6:20 p.m.

PRERACE SCHEDULE: The Sprint Cup garage opens at 11 a.m. The driver/crew chief meeting is at 4 p.m. Driver introductions are at 5:25 p.m.

TV/RADIO: NBC will broadcast the race with its coverage beginning at 5 p.m. with NASCAR America on NBCSN, followed by Countdown to Green at 5:30 p.m. on NBCSN and race coverage at 6 p.m. on NBC. Motor Racing Network’s radio broadcast begins at 5 p.m. and also can be heard at mrn.com. SiriusXM NASCAR Radio will have MRN’s broadcast.

FORECAST: The wunderground.com site predicts a temperature of 81 degrees at race time with a 0 percent chance of thunderstorms. 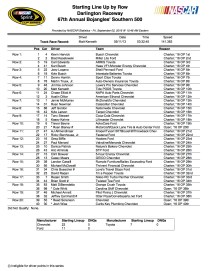