START: Gordon Logan, founder and CEO of Sports Clip Haircuts and Brian Duffy, commander-in-chief, Veterans of Foreign Wars, will give the command start engines at 3:37 p.m. The green flag is set for 3:45 p.m.

PRERACE SCHEDULE: The Xfinity garage opens at 6 a.m. The driver/crew chief meeting is at 1:15 p.m. Driver introductions are at 3 p.m.

TV/RADIO: NBC will broadcast the race with its coverage beginning at 3 p.m. with Countdown to Green, followed by the coverage of the race at 3:30 p.m. Motor Racing Network’s radio broadcast begins at 3 p.m. and also can be heard at mrn.com. SiriusXM NASCAR Radio will have MRN’s broadcast.

FORECAST: The wunderground.com site predicts a temperature of 82 degrees at race time with a 0 percent chance of rain at the start of the race. 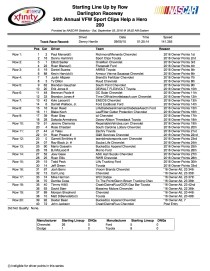