Elliott Sadler extended his points lead to 54 points after his victory in Saturday’s Xfinity Series race at Darlington Raceway.

Daniel Suarez remains second in the season standings. The top 26 drivers did not change positions in the points after the race.

NASCAR announced that Brennan Poole, Darrell Wallace Jr. and Brandon Jones each clinched spots in the Chase after this race. Three spots remain in the 12-driver playoff field. 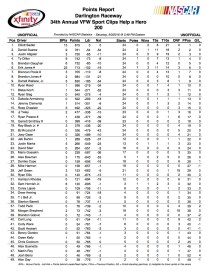