Joey Logano, Jimmie Johnson, Brad Keselowski and Kevin Harvick were among the NASCAR luminaries who made contact, and some of the messages caught Kennedy off guard – even though he already knew many of the senders for a long time.

Though not all of them.

“I don’t think I’ve ever met Joey Logano,” Kennedy, 24, said with a chuckle on the latest episode of the NASCAR on NBC podcast. “It was pretty cool to see his reaction. Keselowski and Harvick texted me. He’s been a huge help to me. Jimmie Johnson as well.

Reaching NASCAR’s premier series and excelling brings another level of exposure, but Kennedy already has name recognition. He is a member of NASCAR’s founding family as the son of International Speedway Corp. CEO Lesa France Kennedy, and it’s been a accompanied by a different perspective on NASCAR. Joe Gibbs Racing driver Carl Edwards has been a longtime family friend.

But Kennedy, who is in his third season on the truck circuit, isn’t interested in leveraging those connections to further his driving career.

“I’m going to be held to the same standards as everybody else is and maybe a little higher,” he said. “That’s what I want.”

After a turbulent year of bouncing between teams following the demise of Turner Scott Motorsports, Kennedy has found a home this season with GMS Racing, where he has finished outside the top 10 only once in 11 starts.

“I want to end up doing something, whatever it is, in motorsports,” Kennedy said. “Hopefully I can make the racing stuff work out. If I don’t, maybe I spend more time on the business side and learning that. I’ve had chances to experience that growing up.” 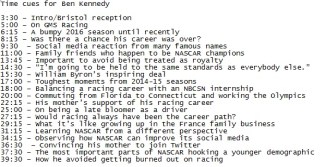