This will be Darlington’s second consecutive “Throwback Weekend,” where numerous Sprint Cup cars will carry paint themes primarily from the 1975-84 era.

With Dale Earnhardt Jr. sidelined for a seventh consecutive race due to a concussion, Jeff Gordon will return for the fifth race to drive the No. 88 Hendrick Motorsports Chevrolet. Gordon was unable to race this past Sunday at Michigan due to previous commitments.

Alex Bowman filled in at MIS for the second time for Earnhardt during his absence, having previously raced at New Hampshire.

This will be the 113th time the Sprint Cup Series has raced at the unique, egg-shaped oval in South Carolina. Carl Edwards is the defending race winner from last year’s event. 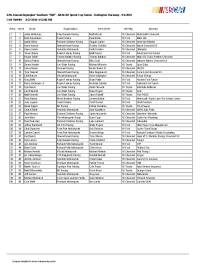