Matt Kenseth is the defending winner of this event, while Joey Logano won this past June’s race at the high-speed, 2-mile track.

Logano will start today’s race from the pole, with six-time Sprint Cup champion Jimmie Johnson on the outside of the front row.

START: Jeff Blashill, head coach of the NHL’s Detroit Red Wings, will give the command for drivers to start their engines at 2:07 p.m. The green flag is scheduled for 2:15 p.m.

PRERACE SCHEDULE: The Sprint Cup garage opens at 8 a.m. ET. The driver/crew chief meeting is at 12 p.m. Driver introductions are at 1:30 p.m.

NATIONAL ANTHEM: U.S. Army A Capella Chorus will perform the anthem at 2:01 p.m. It will be preceded by MIS employee Lisa Bascom singing the Canadian Anthem at 1:58 p.m.

FORECAST: The wunderground.com site predicts a temperature of 82 degrees at race time with a 15 percent chance of precipitation. 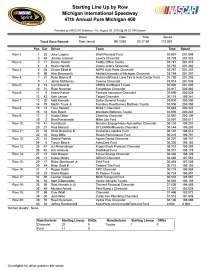