Kyle Larson‘s victory at Michigan International Speedway secured a measure for postseason security for the Chip Ganassi Racing driver while raising the uncertainty for others.

Larson, who entered the Pure Michigan 400 below the cut line for making the Chase for the Sprint Cup on points, effectively locked up a playoff spot with the inaugural win in his 99th Sprint Cup start.

With Darlington Raceway and Richmond International Raceway left in the regular season, three winless drivers are clinging to provisional spots in the Chase on points: Chase Elliott (27 points ahead of the cutoff), Austin Dillon (+21) and Jamie McMurray (+15), Larson’s teammate.

Ryan Newman, who is aiming to make the Chase for the third consecutive season at Richard Childress Racing, is out of a playoff spot by 15 points.

The points situation also changed markedly for Chris Buescher, who needs to be in the top 30 in points to make the playoffs through his win at Pocono Raceway.

Buescher battled early engine problems in his No. 34 Ford and finished 35th. Buescher remained 30th in the rankings but his margin over David Ragan fell from 13 to seven points.

“It felt more like 400 laps than 200,” Buescher told NBCSN’s Kelli Stavast. “I’m really proud of these guys. I know how bad it is to open the hood and work on an engine at operating temperature. They fought hard all day to get it back rolling. We’ll go to Darlington with a positive outlook.”

If Buescher falls outside the top 30 over the next two races, it would open up another spot for a winless driver such as Newman. 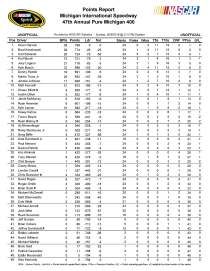