Sadler holds a 47 point advantage over rookie Daniel Suarez. Both drivers are locked into the inaugural Xfinity Series Chase courtesy of wins. Erik Jones, who is sixth in points, is the only other regular who has won this year.

Justin Allgaier is third in points, 57 markers behind his JR Motorsports teammate. There was no change among the top 12 in points following the Road America 180. 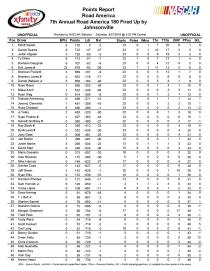