Following a drama-filled night at Bristol Motor Speedway, the Xfinity Series is back in action today at Road America.

It will be the series’ third and final road course race of the season.

START: Ralph C. Stayer, owner and chairman of Johnsonville will give the command to start engines will be given at 3:07 p.m.. The green flag is scheduled for 3:21 p.m.

PRERACE SCHEDULE: The Xfinity garage opens at 12 p.m. The driver/crew chief meeting is at 1 p.m. Driver introductions are at 2:30 p.m.

NATIONAL ANTHEM: Christi Lueck will perform the anthem at 3 p.m.

FORECAST: The wunderground.com site predicts a temperature of 72 degrees and a 56 percent chance of thunderstorms. 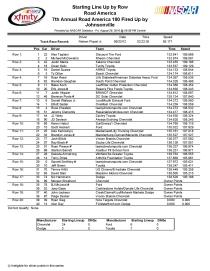