It was McDowell’s first start of the season after in a one-race day with Richard Childress Racing.

Results from the Road America 180: 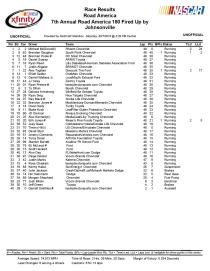