The session was red-flagged with about 27 minutes remaining in the scheduled 50-minute session when reports of lightning within eight miles of Michigan International Speedway surfaced.

Drivers were able to get a little over 20 total combined minutes of practice time in for Sunday’s Pure Michigan 400 before NASCAR halted the session after the lightning report.

A band of rain storms also began closing in on the racetrack, prompting officials to cancel the remainder of the session.

The NASCAR Camping World Truck Series is slated to race at 1 p.m. ET.

In addition to the lightning problem, there was one incident of note in the final practice, involving Denny Hamlin, who had the fastest speed (197.878 mph) during the session before its stoppage.

Hamlin spun exiting Turn 3 and entering Turn 4 and wound up in the infield grass. His car bounced hard once it left the track and ended up in the grass, but damage appeared minimal.

“I just got loose,” Hamlin told CNBC. “It was definitely out of the blue, for sure. The tire and the track combination, you’re so on the edge that when you break traction, you fully pretty much break traction.

“We were going to patch it, just put the splitter on it. But it has a little bit of structure damage to the bumper bars and whatnot, so I think we’ll want to call it a practice. We’ve got a real good baseline. … We’ll make sure it’s right when we go to the green flag tomorrow.”

The session was red-flagged while Hamlin exited the racetrack and took his Toyota Camry to the garage for repairs.

The session resumed shortly after before it was red-flagged again and then cancelled due to the weather issues. 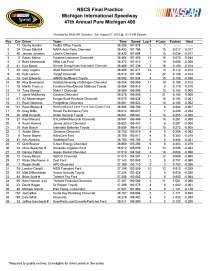 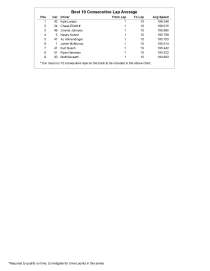