Ray Black Jr. will pay homage to his team owner, Bobby Dotter, with his throwback paint scheme for the Sept. 3 Xfinity Series race at Darlington Raceway.

Revealed on Facebook Live, Black’s No. 07 Scuba Life Chevrolet will resemble the 1992 paint scheme Dotter ran in three races. The Jeno’s Pizza Oldsmobile was the scheme and car Dotter scored his first and only Xfinity Series win with at New River Valley Speedway (what became Motor Mile Speedway).

“I really didn’t want to honor anyone else with the Darlington paint scheme,” Black Jr. said. “Bobby does so much for me and my team, and he’s really helped shaped my career in NASCAR, so it just made sense to me to do one his paint schemes. He’s so well-known by some of the older race fans, but some of the newer fans don’t know of him as well, so I’m excited to bring this attention on to him.”

Said Dotter, “It feels really good to have Ray choose to honor my racing career at Darlington. He could have chosen anyone from any series but to have him willingly choose to honor my career means a lot. It’s a special paint scheme to me since it’s the one I got my win in in the Busch Series, which is cool since that’s now the series I’m an owner in.” 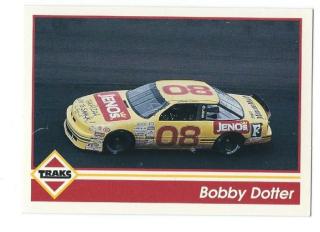