Hall, a native of Detroit, is the co-founder of Slow Roll Detroit, a large weekly bicycle ride. With thousands of riders and in its sixth season, Slow Roll Detroit meets every Monday night in Detroit drives through the city, exploring major and minor neighborhoods of the city.

“It’s an honor to be invited by Pure Michigan to take part in the Pure Michigan 400,” Hall said in a press release. “It’s rare that I get to go fast on Slow Roll so to be able to bring the two cultures together means a ton.” 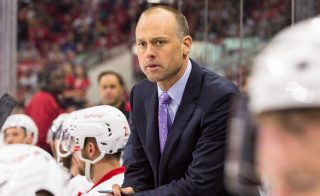 The second year head coach will give the command to start engines when the race begins on NBCSN.

The 42-year-old is the 27th coach in Red Wings’ history and the first American to lead the Red Wings. Blashill is just the third Michigan native to coach a major Detroit sports team, joining Steve Mariucci (Detroit Lions, 2003-05) and Dave DeBusschere (Detroit Pistons, 1964-67).

“It’s an honor to serve as grand marshal for the Pure Michigan 400,” Blashill said in a press release. “I was born and raised in Michigan and have had the opportunity to spend most of my coaching career here, so I know how passionate the fans are for all sports. I’m thrilled for the opportunity to meet the drivers, take part in the pre-race activities and soak in the atmosphere on race day.”