The Sprint Cup Series makes its annual visit to Bristol Motor Speedway for tonight’s night race. With work done to the lower groove, drivers are excited about the possibility of running either low or high at the high-banked track.

START: Johnny Morris, founder, Bass Pro Shops, will give the command for drivers to start their engines at 8:06 p.m. The green flag is scheduled for 8:13 p.m.

PRERACE SCHEDULE: The Sprint Cup garage opens at noon. The driver/crew chief meeting is at 5:15 p.m. Driver introductions are at 7:20 p.m.

NATIONAL ANTHEM: MRO children of competitors will perform the anthem at 7:57 p.m.

TV/RADIO: NBCSN will broadcast the race with its coverage beginning at 7:30 p.m. with Countdown to Green. Race coverage begins at 8 p.m. Performance Racing Network’s radio broadcast begins at 7 p.m. and also can be heard at goprn.com. SiriusXM NASCAR Radio will have PRN’s broadcast.

FORECAST: The wunderground.com site predicts a temperature of 77 degrees at race time with a 39 percent chance of thunderstorms. 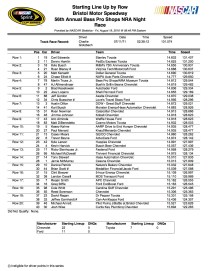