The JR Motorsports driver is the highest ranked among winless drivers in the standings with six races remaining before the inaugural Chase begins. Points leader Elliott Sadler, Daniel Suarez (second) and Erik Jones (sixth) are the only Xfinity regulars to have locked up berths in the 12-driver, seven-race playoff.

Among other winless drivers jockeying for a playoff spot, Ty Dillon dropped a spot to fourth in points after a late crash. Brendan Gaughan moved up to fifth in the rankings. 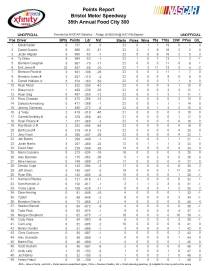