Just what kind of race will the Xfinity Series put on tonight? That will be among the key questions after Bristol Motor Speedway treated the lower groove to help drivers to run there. Wednesday’s Camping World Truck race showed that they could run on the lower groove but a few ran on the top side with some success. Can the top line be as fast or faster than the bottom line?

START: Chad Keen, mayor of Bristol, Tennessee, will give the command start engines at 7:37 p.m. The green flag is set for 7:44 p.m.

PRERACE SCHEDULE: The Xfinity garage opens at 10 a.m. The driver/crew chief meeting is at 5 p.m. Driver introductions are at 7:05 p.m.

NATIONAL ANTHEM: Liz Moriondo will perform the anthem at 7:31.

TV/RADIO: USA Network will broadcast the race with its coverage beginning at 7 p.m. with Countdown to Green, followed by the coverage of the race at 7:30 p.m. Performance Racing Network’s radio broadcast begins at 7 p.m. and also can be heard at goprn.com. SiriusXM NASCAR Radio will have PRN’s broadcast.

FORECAST: The wunderground.com site predicts a temperature of 75 degrees at race time with a 17 percent chance of rain at the start of the race. 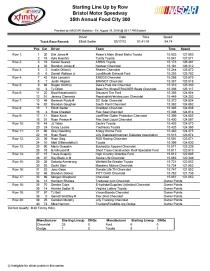