After teammate Denny Hamlin was fastest in the first two rounds, Carl Edwards put down a lap of 131.407 mph to claim the pole for the Bass Pro Shops NRA Night Race at Bristol Motor Speedway.

It’s Edwards fifth pole of 2016, his second in as many races and gives him a sweep of the poles at the short track this season.

“A little bit surprised, we didn’t make a mock (qualifying) run (in practice),” Edwards told NBC Sports. “That tells you how great of teammates I have. They’re so fast. They helped us a lot.”

Edwards’ five poles are a career high. Before 2016, the most he had in a season was three in three different seasons.

“I can’t believe we’ve qualified as well as we have this year and not gotten a pole, ” Hamlin told NBC Sports. Hamlin has an average start of 6.4 through the first 22 races of this season. “The top (lane) will definitely come in, it’s just a matter of if it will be quicker than the bottom. I think the bottom wears out tires, so you have to be aware of that.”

Blaney, the rookie for Wood Brothers Racing, will make his career-best start on a non-restrictor-plate track (fourth, Talladega 2014). His previous best was fifth at Michigan in 2015 and earlier this year.

“It’s been one of the smoothest day I think we’ve had,” Blaney told NBC Sports. “Our qualifying trim was really good and I thought our race trim was really similar, too.”

Jeff Gordon, making his fourth substitute start for Dale Earnhardt Jr., will start 11th. He hadn’t started better than 21st in his previous three outings. After qualifying, Gordon said he would not drive the No. 88 next week at Michigan because of a prior commitment. If Dale Earnhardt Jr. is not cleared to race the race there, Hendrick Motorsports said Alex Bowman will be in the car.

Behind him is rookie Chris Buescher, who earned his best Sprint Cup start. The Front Row Motorsports car is part of an alliance with Roush Fenway Racing and is the only Roush related entry in the top 12. Buescher, who won at Pocono Raceway in a fog-shortened race, is three points out of the 30th spot, which he must be within to qualify for the Chase for the Sprint Cup.

Kyle Larson will start 23rd, followed by Kevin Harvick in 24th, marking his third straight race without advancing to the third round.

Greg Biffle spun with 16 minutes left in the first round and suffered light damage to his right rear quarter panel, Biffle had spun in the final practice session earlier Friday. The No. 16 will start 34th Saturday.

Tony Stewart, Jamie McMurray, Danica Patrick and Ricky Stenhouse Jr. failed to advance out of the third round. Stewart will start 27th in his final Sprint Cup start at Bristol Motor Speedway. 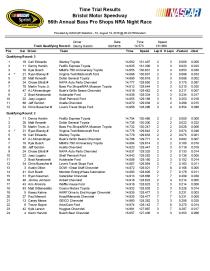 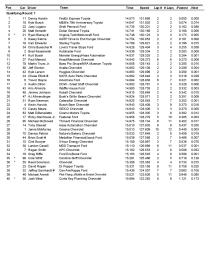