Tyler Reddick claimed the pole for  the Camping World Truck Series’ UNOH 200 at Bristol Motor Speedway. With a speed of 128.917 mph, Reddick earned his third career Truck pole and his first since two at Talladega and Texas Motor Speedway in 2014.

The top five was filled out by Daniel Suarez, Cameron Hayley, Ben Rhodes and Christopher Bell.

Reddick will start in the top five for the sixth time this season and the fourth race in a row. It’s his first pole in 37 races.

“Trust me, I haven’t forgotten it’s been that long either,” Reddick told Fox Sports 2. “We’ve really been trying to fight to get better qualifying speeds … fortunately tonight, we’ll be starting P1, now we don’t have to worry about too much.”

Reddick will be seeking to give Brad Keselowski Racing its first win of the season and its third Bristol win in as many years.

Among those advancing to the third round was Matt Crafton, John Hunter Nemechek, Spencer Gallagher, Ben Kennedy and Rico Abreu.

Austin Cindric, attempting to qualify for his third career truck race, spun in Turn 1 with 14 minutes and 19 second left in the first round to bring out the red flag.

Cindric returned to the track and right after putting up the 23rd fastest speed, spun again in Turn 1, barely avoiding hitting the wall. Cindric managed to not drop lower than 27th, otherwise he wouldn’t make the field.

In round two, rookie Rico Abreu got loose and spun in Turn 2, backing into the outside wall and sending Abreu to a backup truck. 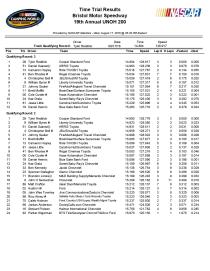 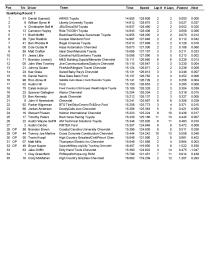