The deep thinking happens on heavy equipment these days for Tony Stewart.

Though in his final NASCAR season, the three-time Sprint Cup champion’s pace hardly has slowed between racing a stock car, co-owning Stewart-Haas Racing and managing a myriad business portfolio that also includes dirt tracks, a racing series and a PR firm.

On a 400-acre spread near his Columbus, Indiana, hometown, Stewart’s best moments of reflection come aboard an excavator while clearing land.

“I get a lot of thinking done when I’m out working,” Stewart said on the latest episode of the NASCAR on NBC podcast. “Having a project to work on gives you the outlet to get away from things, but at the same time, when you’re in a piece of equipment by yourself,  you can think of other things that are on your mind, and it gives you time to sort it out and think of solutions to problems that you have.”

During a wide-ranging discussion taped Aug. 3 at the NASCAR Hall of Fame after the unveiling of his Coke-sponsored Southern 500 car that honors Bobby Allison, Stewart explained what life is like on a sprawling homestead that also features an 8.5-acre pond, a 1,500-gallon trout stream and a 5,600-gallon freshwater aquarium.

It’s become an occasional home to two bald eagles, and Stewart plans to begin breeding deer this fall. He has used Periscope to document the other part-time residents of his property – Camping World Truck Series driver Rico Abreu and his open-wheel team. Abreu discussed living in Stewart’s house on a previous edition of the NASCAR on NBC podcast.

“There’s no shortage of fun with us,” Stewart said, describing some epic fireworks battles with the group. “I thought Rico was going to blow up my Lamborghini and possibly burn my house down in the process. But we definitely race hard, we play hard and care a lot about each other.”

During the podcast, Stewart also discussed his decision to retire after the 2016 season from NASCAR’s premier series, which he describes as a lot of work, stress and pressure because of the demands from a 36-race slate that runs February through November.

“For the last 20 years, I’ve been on a NASCAR schedule,” he said. “Everything you do revolves around NASCAR’s schedule. I’ve loved it. If I had to go back and start over, I’d do the same thing over again. I wouldn’t change a thing about it.

“But I’m at a point in my life that I’m ready to do something different. There’s unfinished business that I have with a lot of other categories in my life that I want to go back and finish things. To do that, I’ve got to step aside from the NASCAR side.”

The free subscription will provide automatic downloads of new episodes to your smartphone. It also is available on Stitcher by clicking here and also can be found on Google Play, Spotify and a host of other smartphone apps. 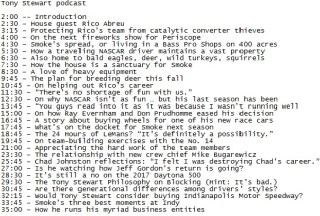