With his first career truck win, Kennedy effectively clinched a berth in the inaugural eight-driver playoff for the series championship. Kennedy moved up two spots to seventh in the standings.

The two highest-ranked winless drivers who hold provisional spots in the playoff are Daniel Hemric (second in points) and Timothy Peters (fourth).

The other six drivers in the top eight have qualified for the Chase with a victory. Peters is 29 points ahead of Cole Custer (ninth). Tyler Reddick (10th) trails Peters by 32 points.

Cameron Hayley, who entered Bristol in a points tie with Kennedy and clinging to the final provisional playoff spot, fell three spots to 11th in the standings with a 24th-place finish Wednesday at the 0.533-mile oval.

There are three races left in the regular season before the truck series playoffs begin Sept. 24 at New Hampshire Motor Speedway. 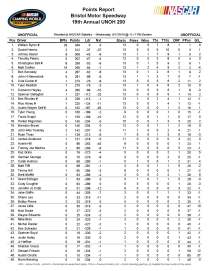