Stenhouse’s Roush Fenway Racing Ford Fusion will have a Fastenal paint scheme similar to the one Clauson ran during the 2008 season in the NASCAR Xfinity Series.

Clauson, 27, died on Sunday, August 7, less than 24 hours after his Midget car was broadsided during a dirt track race in Kansas. 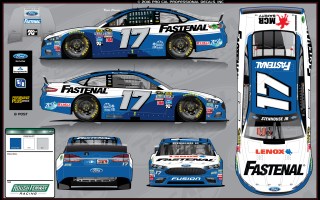 “It will be a huge honor to run the same Fastenal scheme that Bryan raced in 2008,” Stenhouse said. “This past week has been difficult for many but it has been great to see the racing community join together to support Bryan’s family, friends and Lauren (Clauson’s fiancée Lauren Stewart).

“Bryan was one of my best friends and hopefully we can ‘parked it’ in victory lane on Saturday for Bryan.”

“Parked it” was a term Clauson liked to use on social media after winning races.

Fastenal was the primary sponsor when Clauson raced for Chip Ganassi Racing in the Xfinity Series in 2008. In 21 starts that season, he earned one pole (Daytona) and one top-five and two top-10 finishes.

Stenhouse has made seven Sprint Cup Series starts at Bristol, with two top fives and three top-10 finishes. His best career finish at the .533-mile bullring is second (2014).