All seats are filled with drivers; there are no TBD’s.

This will be the 19th annual Truck Series race held at the .533-mile bullring. Ryan Blaney is the defending champion, having won last year’s race there. Cole Custer dominated the race, leading 111 of what was scheduled to be 200 laps, but was extended to 202 laps due to a late caution that resulted in a green-white-checker finish.

Blaney took the lead on Lap 200 and led the final three laps to earn the victory in the No. 29 Cooper Standard Ford owned by former NASCAR Sprint Cup champion Brad Keselowski. 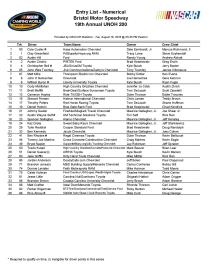