However, only 40 drivers are listed on the most recent entry list, released Tuesday. Cars still waiting for drivers arethe No. 25 Rick Ware Racing Chevrolet and the No. 77 Chevrolet of Obaika Racing.

This will be the 69th Xfinity Series race held at the .533-mile bullring. Kyle Busch is the defending champion (although he’s not listed on the preliminary entry list for Friday’s race).

Denny Hamlin and Chris Buescher led the most laps in last summer’s race (106 laps each), but after a late caution Busch assumed the lead on Lap 301 and led the final two laps to win under a green-white-checker finish.

Earlier this year on April 16, Erik Jones won the first of the this season’s two annual Xfinity Series races at BMS. 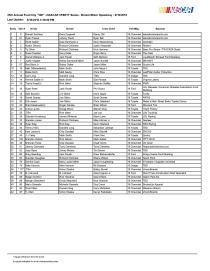