This will be the 112th NASCAR Sprint Cup Series race held at the .533-mile bullring. Joey Logano is the defending champion of this race (and goes for his third straight Bristol summer race win Saturday night).

Although Kyle Busch led the most laps (192 of the scheduled 500 laps) in last summer’s race, Logano led the second-most number of laps (176), including the final 64 as he took the checkered flag.

It was Logano’s second win in a three-race stretch at Bristol, also winning the summer 2014 race.

Darrell Waltrip holds the track record for most Cup wins (12). Among active drivers, Kyle Busch, Kurt Busch and Jeff Gordon have each won five times at Bristol in their Cup careers. 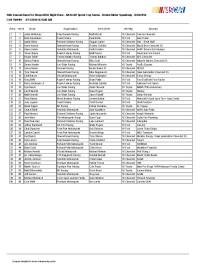