After a dominating performance by Joey Logano at Watkins Glen International, the Xfinity Series returns to action today at Mid-Ohio Sports Car Course.

It will be their second of three road course races this season and the 21st race of the year.

START: The command to start engines will be given at 3:37. The green flag is scheduled for 3:48.

PRERACE SCHEDULE: The Xfinity garage opens at 11 a.m. The driver/crew chief meeting is at 12:30 p.m. Driver introductions are at 3 p.m.

NATIONAL ANTHEM: Wendy Reiser will perform the anthem at 3:31.

TV/RADIO: USA Network will broadcast the race with its coverage beginning at 3 p.m. with Countdown to Green. Race coverage begins at 3:30 p.m. Motor Racing Network’s radio broadcast begins at 3 p.m. and can also be heard at MRN.com. SiriusXM NASCAR Radio will have MRN’s broadcast.

LAST TIME: Regan Smith scored his first win of the 2015 season after moving leader Alex Tagliani in the last corner on the last lap. 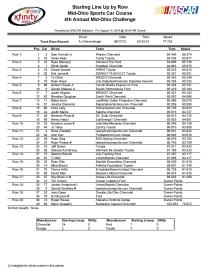