Ty Dillon was fastest in the first of two practice sessions on Friday at Mid-Ohio Sports Car Course with a lap of 96.087 mph.

Dillon led the way for the Richard Childress Racing cars, which swept the first four spots.

Blaney is the only Sprint Cup regular in the field this weekend.

Two Joe Gibbs Racing drivers had setbacks during the session. Daniel Suarez suffered damage to his right-rear quarterpanel but the No. 19 team will fix the damage and avoid going to a backup car. Suarez was ninth fastest at 93.927 mph.

Owen Kelly, driving the No. 18, had a shift issue, resulting in the team making an engine change. Kelly was 11th fastest at 93.820 mph.

Here are the speeds from the first session: 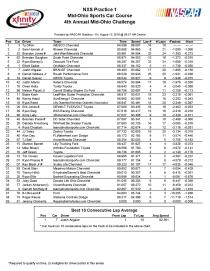