With his win in the Cheez-It 355 at Watkins Glen International, Denny Hamlin became the sixth Sprint Cup driver to win multiple races in 2015. He jumped six spots on the latest Chase grid to fourth.

Losing spots were Jimmie Johnson and Austin Dillon, who each dropped two spots after being involved in a multi-car wreck Sunday that led to Johnson finishing last.

Luckily, Johnson is already locked into the Chase. Dillon is 14th on the grid and has yet to win this season.

Chris Buescher, who won last week at Pocono Raceway, is still not on the grid. After finishing 33rd due to being in a late wreck and being forced to go to the garage, Buescher is still three points out the top 30 in points. A driver must have a win and be in the top 30 to automatically qualify for the Chase.

AJ Allmendinger re-entered the top 20 after finishing fourth Sunday. He is now 34 points behind the cutoff spot of 16th. In 16th is Kyle Larson. Larson is teetering on the edge of the top 16, only eight points up on 17th, after Allmendinger wrecked him on the final lap of Sunday’s race, sending Larson to a 29th-place finish instead of a top five. 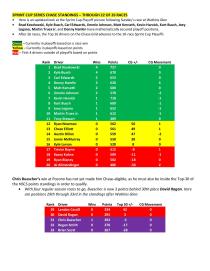