Buescher, who won last weekend at Pocono, must be in the top 30 in points after next month’s Richmond race to make the Chase. He finished 30th Sunday at Watkins Glen after being collected in a late crash. He is 31st in the season standings, three points behind David Ragan. Buescher gained three points on Ragan on Sunday.

Buescher’s team made repairs under caution and he lost only one lap from a crash that also collected Ragan, who finished 33rd.

“That is not how we expected that one to go,” Buescher said. “We got down to it at the end and we were racing through the bus stop and come out of it and I am not sure exactly who, but a couple guys went through the dirt and caused a wall that we couldn’t see through. I came through the other side of it and (Kevin Harvick) was sitting there backwards. I tried to get down to avoid it and hooked the splitter in the mud, tucked it up under, and we got stuck. So I was trying to get it pushed off where we could drive back around but had to get out and go through all that.”

Buescher was unable to keep the car going and wanted a tow. Instead, Buescher was told he had to exit the car to make a trip to the infield care center. His team told him to stay in the car, but after consulting with NASCAR, he was told to exit it.

“I was just mad,” Buescher said. “I get it. I couldn’t move under my own power. I was trying. The fact of it is it’s stuck in the mud, and they can’t push from the front. Just frustrated that it all went down that way. The CSX team did a good job, got it fixed, got back on track, gained points. At the end of the day, it’s back to the points racing we were doing last year. So we must be running for something important if we’re points racing again. I guess there’s a slight bright side to the day.”

Buescher was released from the infield care center and made it back to his car in the garage before the red flag ended. He was in his car when NASCAR put away the red flag. 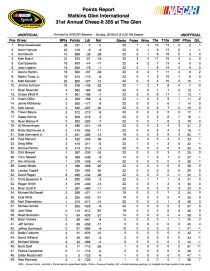