Carl Edwards put down a lap at 126.562 mph Saturday to claim the pole for the Sprint Cup Series’ Cheez-It 355 at Watkins Glen International.

It’s the fourth pole of the season for Edwards (who previously qualified first at Texas, Bristol and Sonoma), breaking a tie with Martin Truex Jr. for the series lead. It also marks the second consecutive year a driver has swept the poles for the circuit’s road course races (AJ Allmendinger).

The top five qualifiers for Sunday’s race, which will be shown on the USA Network, are Edwards, Kyle Larson, Tony Stewart, Matt Kenseth and Kyle Busch.

“The track is a little strange, it started out a little slippery in the first run,” Edwards told NBC Sports of the track that was repaved in the offseason. “We’ve got to work a little bit in race trim, but we’re starting up front. We’ve got a great pit crew.”

Edwards has one win at Sonoma Raceway (2014), but his best result at WGI is third in 2009. He has five top fives at the road course in upstate New York.

“I think tomorrow is going to be a little bit of an adventure,” said Edwards. “The new pavement, nobody knows how that’s going to go long, deep into the runs with tire build up. I think the braking zones are pretty tough, it’s going to be nice and warm.”

Larson will be making his best start of the year. It’s his second top five after qualifying fifth at Sonoma.

“We changed just about everything (after practice) I thought,” Larson told NBC Sports. “Finally got some grip late in practice. You could still use some more, but it was fun. I didn’t think I’d end up second. I didn’t think I ran that good of a lap the first round. Missed the bus stop pretty bad. I think if I’d not tried to brake as deep that first run I had in the second round, probably could have gotten close to what Edwards ran there.”

Tony Stewart, who has five wins at WGI, will start his last race on the road course in third. He started third last year before a rear-gear problem resulted in a DNF.

Jeff Gordon, substituting for Dale Earnhardt Jr. for the third consecutive race, will start 21st. No Hendrick Motorsports cars will start in the top 12. Jimmie Johnson was the best qualifier in 13th.

Michael McDowell will start 11th, tying his previous best start in seven races at WGI from 2012. That also ties his best start at a non-restrictor plate track.

The first session briefly was red-flagged with 15:19 left to clean up debris from a Paul Menard spin in the inner loop. Menard will start 33rd. 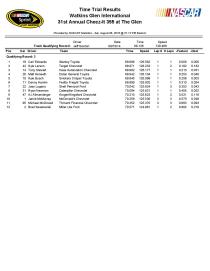 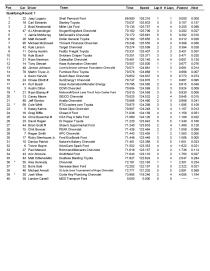