In the first of two Thursday practice sessions for the Xfinity Series at Watkins Glen International, Kyle Busch had the fastest speed at 122.390 mph.

Busch recorded only 11 laps in the 1 hour and 25-minute session.

Allgaier was the only Xfinity Series regular in among the top seven speeds.

Trevor Bayne, starting in his first Xfinity race since 2014, was sixth fastest. Brad Keselowski was seventh. 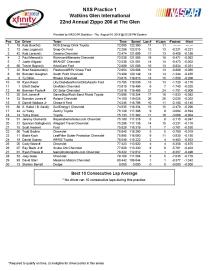