Mike Wells, the director of NBC Sports’ NASCAR race broadcasts, joined the NASCAR on NBC podcast to share insight, stories and wisdom from a 35-year career.

Working in a weekly environment he describes as “controlled chaos,” Wells chooses the cameras that bring each race to viewers. He’s been doing it since a Sprint Cup race at Rockingham, North Carolina in 1981 – for so long that he has lost track of precisely how many races he’s directed.

“I’ve seen a huge transformation from where NASCAR was and where it is today, and I’m so proud to be a part of that,” Wells said.

The camera technology also has changed dramatically in that span. Wells explains how that has improved coverage, how he manages the flow of a race broadcast and which cameras provide the signature shots of a NASCAR broadcast.

He also reflects on some of the history he has helped present to nationwide audiences.
“It’s kind of cool being involved in Jimmie Johnson’s first Daytona 500 win, his first Brickyard win, his first championship,” he said. “Richard Petty’s last start was Jeff Gordon’s first race, and I directed that. That is more than just a race. It’s so cool to be a part of those kinds of experiences.” 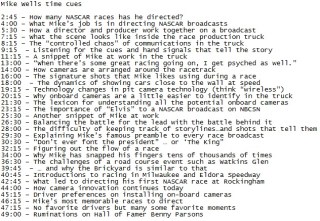