Chris Buescher captured his first Sprint Cup victory in his 27th career start in the series, winning Monday’s Pennsylvania 400 that was shortened by 22 laps because of rain and fog.

Brad Keselowski finished second, followed by Regan Smith, Kevin Harvick and Tony Stewart in the event, which had been postponed from Sunday because of rain. 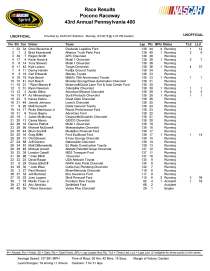