Richard Childress Racing teammates Austin Dillon and Ryan Newman each climbed a spot in the Sprint Cup points standings after the Pennsylvania 400 at Pocono Raceway.

Dillon (ranked 11th) and Newman (12th) are the two highest-ranked winless drivers who currently are within the cutoff for making the Chase for the Sprint Cup on points. Chase Elliott, who finished 33rd at Pocono, dropped two positions to 13th but remains 45 points ahead of the current cutoff.

Chris Buescher won Monday at Pocono but remained 31st in the points standings. The Front Row Motorsports rookie must be within the top 30 in points after the regular-season finale Sept. 10 at Richmond International Raceway in order to qualify for the playoffs by virtue of his victory.

Buescher is six points out of 30th with five races left in the regular season. 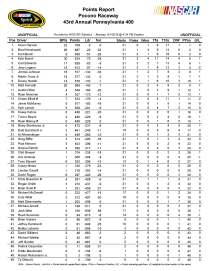