The Sprint Cup Series will try it again at Pocono Raceway after Sunday’s race was postponed by rain.

Here’s all the info you need for Monday’s rescheduled Pennsylvania 400.

TV/RADIO: NBCSN will broadcast the race with its coverage beginning at 10:30 a.m with Countdown to Green. Race coverage on NBCSN begins at 11 a.m. Motor Racing Network’s radio broadcast begins at 10:45 a.m. and can also be heard at mrn.com. SiriusXM NASCAR Radio will have MRN’s broadcast.

FORECAST: The wunderground.com site predicts a temperature of 67 degrees at race time with a 4 percent chance of rain.

TO THE REAR OF THE FIELD: Aric Almirola goes to the rear for a rear differential change. 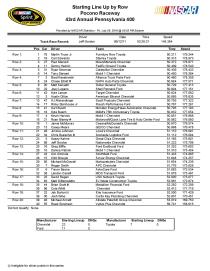