William Byron extended his lead in the points with his fifth victory of the season, but a change took place among those racing for a Chase spot.

Eight drivers will compete for the championship when the playoffs begin Sept. 24 at New Hampshire Motor Speedway. Byron and Matt Crafton have already clinched spots with multiple wins. Other drivers with victories this season are Johnny Sauter, Christopher Bell and John Hunter Nemechek. That, for now, leaves three playoff spots. 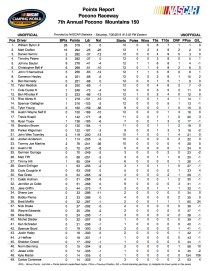