Jeff Gordon was 22nd on the speed chart with a lap of 174.645 mph in the No. 88 car for Dale Earnhardt Jr., who will miss his third consecutive race because of concussion-like symptoms.

There were no incidents in the session, which was delayed 25 minutes because of weepers on the track after overnight rain. NASCAR did not extend the session.

Sprint Cup cars are back on track for qualifying at 4:15 p.m. ET on NBCSN. 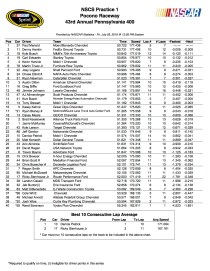