With the car he drove to a dominating Coca-Cola 600 win, Martin Truex Jr. claimed the pole for the Pennsylvania 400 at Pocono Raceway. It is his third pole of the season and his first since the Coke 600.

“This is the car we had at Charlotte,” Truex told NBCSN’s Parker Kligerman, referring to the car that led 392 of 400 laps in that race. “I don’t know, something about it just feels right to me.”

The driver of the No. 78 Toyota for Furniture Row Racing now has 10 poles in his Sprint Cup career. The team will look to improve on its last appearance at Pocono when it started 17th and finished 19th a year after winning the race.

“We had a bad race here the first time around and we didn’t get much practice and qualified bad and that led us to getting into trouble on pit road in the first stop of the race,” Truex said. “Obviously, the first pit box, I’m sure we’ll pick that one. That a huge advantage.”

Truex is tied with Edwards for the most poles this season.

Menard, who goes into this weekend with a new crew chief in Danny Stockman, starts in the top five for the first time this season and the first time since the 2015 Coke Zero 400 at Daytona International Speedway. It’s his first top five start on a non-restrictor plate track since the June 2014 race at Michigan.

“The car’s been good since we’ve unloaded,” Menard told NBCSN. “Danny’s spent a lot of time in the shop this week … he’s never been on a Cup team before, so he’s been working with the guys trying to get everything sorted with the car for this weekend. This is a new style car that RCR debuted last week at Indy and everybody worked out a lot of bugs with it.”

With Austin Dillon starting 12th, Richard Childress Racing will start all three of its cars in the top 12 for the first time since the August 2014 Michigan race.

The start of qualifying was delayed roughly 20 minutes by NASCAR due to numerous cars failing pre-qualifying laser inspection due to a glitch in the system.

“We had a little bit of a glitch this morning at the opening of inspection with our laser platform,” Scott Miller, NASCAR’s senior vice president of competition and racing development told NBCSN. “We got it rectified quickly, thought we’d be able to make up the time, but teams are struggling through templates as well. Because we had a little ownership in the LIS getting started late we’re going to delay the start of qualifying.” 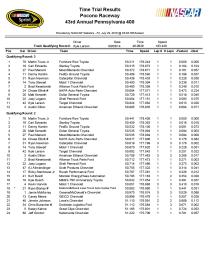 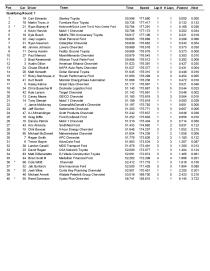