Joe Gibbs Racing announced Tuesday that Dakoda Armstrong will drive the No. 18 car this weekend with Matt Tifft still out.

However, three cars do not have driver’s assigned to them just yet:

This will be the 14th Xfinity Series race held at the .875-mile Iowa Speedway. Sprint Cup regulars Ricky Stenhouse Jr. and Brad Keselowski have been the winningest drivers at Iowa. Each has won there three times.

Ryan Blaney won this race last year, while Sam Hornish Jr., substituting for Tifft, won on June 19. It was Hornish’s second win there in the last three years. 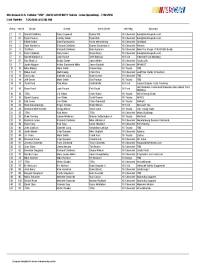