Following Sunday’s Combat Wounded Coalition 400 at the Brickyard, there was considerable movement among drivers ranked from 13th to 20th coming into the race at Indianapolis Motor Speedway.

Brad Keselowski and Kyle Busch are both at the top of the rankings with four wins each.

The biggest mover upward after Sunday’s race was Kyle Larson, who jumped four positions to crack the Chase Grid in 16th position (which is the final qualifying spot for the Chase).

Also moving up was Kasey Kahne, who climbed two spots to 17th position.

One other driver also moved up slightly in the Grid rankings: Austin Dillon climbed from 14th to 13th.

As for drivers that dropped in the Grid rankings: 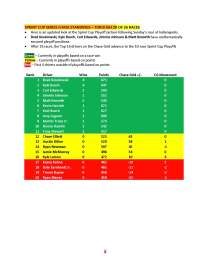