The Sprint Cup Series makes its annual visit to Indianapolis Motor Speedway today for the 23rd running of the Crown Royal presents the Combat Wounded Coalition 400.

START: Tony George will give the command for drivers to start their engines at 3:07 p.m. The green flag is scheduled for 3:19 p.m.

PRERACE SCHEDULE: The Sprint Cup garage opens at 9 a.m. The driver/crew chief meeting is at 1 p.m. Driver introductions are at 2:30 p.m.

NATIONAL ANTHEM: Cassadee Pope will perform the anthem at 3 p.m.

TV/RADIO: NBCSN will broadcast the race with its coverage beginning at 2 p.m. with NASCAR America Sunday. The Indianapolis Motor Speedway Radio Network’s radio broadcast begins at 2:30 p.m. and also can be heard on Performance Racing Network and at goprn.com. SiriusXM NASCAR Radio will have PRN’s broadcast.

FORECAST: The wunderground.com site predicts a temperature of 91 degrees at race time with a 15 percent chance of thunderstorms. 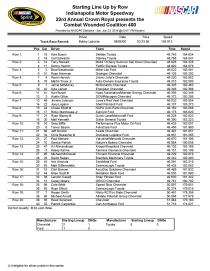