Jeff Gordon was ninth on the speed chart. He spent part of the session talking about how tight his car was in his various runs.

The only incident came when Kyle Busch spun with about 20 minutes left as he was running underneath Patrick Carpentier in Turn 2. Busch said Carpentier “chopped” him, sending Busch’s car into a slide. It made no contact with the wall.

“I’m gonna apologize for sure,” Carpentier told NBCSN. “I was a bit further ahead and I didn’t think he’d catch up that quickly. My mistake. I’m gonna go say that. I haven’t been in a car for five years. Things happen pretty fast.” 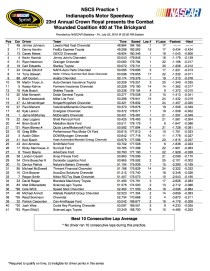