Christopher Bell improved his chances of qualifying for the inaugural truck circuit’s Chase, improving two spots to sixth in the rankings with a runner-up finish at Eldora.

John Hunter Nemechek fell two spots to eighth in the standings but isn’t in danger of falling out of the playoffs by virtue of having a win.

The standings at Eldora: 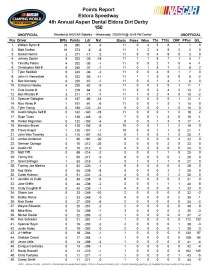