Camping World Truck Series rookie Rico Abreu and Travis Kvapil crashed while racing for a transfer spot with three laps remaining, leaving both trucks heavily damaged. Kvapil was displeased that Abreu’s Toyota slid up the track into his Chevrolet, and he drove into the left side of Abreu’s truck as their vehicles limped around the track.

Abreu told FS1 that his truck “wouldn’t turn at all.”

Both he and Kvapil will have another opportunity to make the 150-lap main event via a last-chance qualifier.

Schrader transferred to the main event along with the rest of the top five: Johnny Sauter, Justin Shipley, William Byron (who rallied from a spin on the seventh of 10 laps) and Cole Custer. 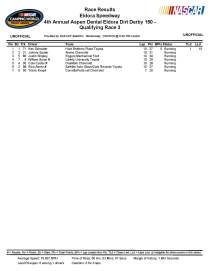