Caleb Holman will get credit for the Camping World Truck Series pole at Eldora Speedway after putting down a lap of 86.659 mph.

Holman is a native of Abingdon, Virginia, and drives for Henderson Motorsports. The Eldora effort is his first career pole in 31 Camping World Truck Series starts with his previous career-best being a sixth place at Iowa Speedway last season.

The qualifying races at Eldora begin at 7 p.m. ET.

Here are the results from qualifying: 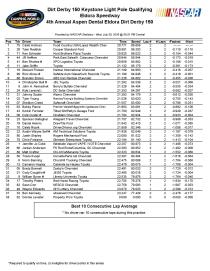