START: The command for drivers to start engines will be given by New Hampshire Gov. Maggie Hassan at 1:32 p.m. ET. The green flag is scheduled for 1:39 p.m.

PRERACE SCHEDULE: The Sprint Cup garage opens at 7:30 a.m. The drivers meeting is at 11:30 a.m. Driver introductions are at 1 p.m.

NATIONAL ANTHEM: It will be performed by Caroline Burns from “The Voice” at 1:26 p.m.

FORECAST: The wunderground.com site predicts 79 degrees at race time with a 34 percent chance of rain.

LAST TIME: In the Sept. 27 race, Matt Kenseth led the final three laps after Kevin Harvick ran out of fuel while leading and finished 21st. 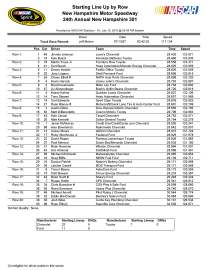